On July 20th, Screen Division traveled to the Frontières Coproduction market in Montréal where the 8th edition of the market was taking place. 20 Projects from NA and Europe have been presented to buyers and producers from all around the world.

On the 24th, SD flew to South Korea to participate at the Network of Asian Fantastic Films (NAFF) in capacity of Jury. In total, 24 projects from Asia and Europe will be pitched. The NAFF offers 7 different awards, including a postproduction award in the form of a support for edit, sound and D.I.

BIFAN, the Bucheon International Fantastic Film Festival, is celebrating its 20th anniversary this year, offering a range of 320 films to watch, with a showcase of Gaumont films, who is celebrating 120 years of existence. More about BIFAN HERE. 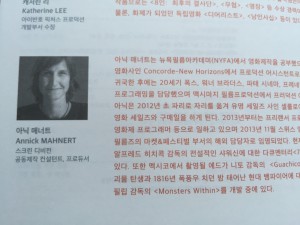